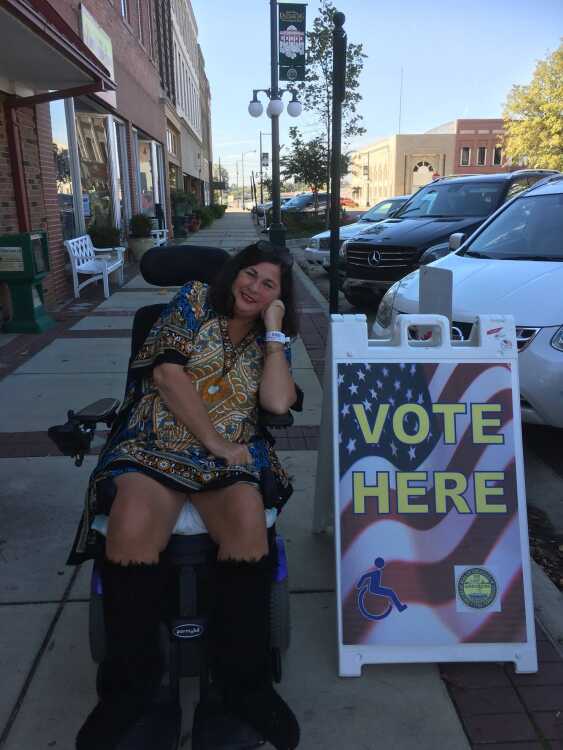 Ms. Alley voted! Did you?

In my mind I'm thinking about divisions and civic duties. Students, remember when we did our Civics Unit? We started with the Preamble to the Constitution and examined each Article and Amendment. We not only memorized the Preamble but learned every word and the meanings. Posterity was one of the most important words we learned. I hope you still remember the definition. You grew lots of brain cells or dendrites that semester. You learned the responsibilities of each branch of the government and the limitations as well. Remember "checks and balances?" What about Executive decisions? You learned the meaning of a "lame duck" president. There were so many objectives. I loved this unit of study. Why? It made you an educated citizen. It made you aware of your "inalienable" rights and your civic duties. Remember when we took the official citizenship test? You were all like, "This is hard!" Yes, my students, gaining citizenship is very hard. Imagine if after 8th grade you failed it and your citizenship was revoked. I fear many, many Americans don't know the mechanics of our government. Yes, I know it's not perfect and it needs mending. This is causing such division among Americans. I fear those without the educational background only know bits and pieces. How lucky are we to be born in a country that recognizes "inalienable" rights and has a Bill of Rights. We owe it our country to get our "free" education. Thank you to the Puritans and Thomas Jefferson for realizing the importance of an education. So many youth today in America see school as a nuisance when they should embrace knowledge. How do the masses of people become controlled? Lack of knowledge and education. Have you read 1984 by George Orwell? You should. Like Dr. Seuss said, "You have brains in your head. You have feet in your shoes. You can steer yourself any direction you choose. You're on your own. And you know what you know. And YOU are the one who'll decide where to go..." Uneducated people can be more easily manipulated by a few with power. I always use the Tiananmen Square protest as an example. Never heard of it? Read about it. These fellow humans were educated and demanding their "inalienable rights." Read and see what happened in 1989.

The divisions in our country are not new or surprising. In George Washington's Farewell Address, he warned against political factions or divisions or parties. Almost immediately after he stepped down and set a precedent of serving a two term office, those parties began to develop. Wouldn't it be great if we had one American party? I don't know if that would be good either what if we could glean the good from each party and truly try to make "America Great Again." We are all diverse and have our druthers. Can't our one true goal be to work together and not to focus on differences? Our country is predicted to have a majority of Hispanic persons by the year 2020. Did you know that? Does it scare you? Why? They are different. Yes, somewhat but they want the "America Dream." So many of Americans have lost the desire of owning a home, owning a car, and raising a family. The "American Dream" provides tax payers, creates jobs, and builds community. We, America, need this. Please don't say that all immigrants are not good. Please remember who built the Erie Canal, the Trans-Continental Railroad, worked in sweat shops in the early 1900's, and the fields of cotton. Immigrants are the backbone of our nation. Many immigrants died creating the infrastructure of our nation as well as settled it in the beginning. Know the immensely popular broadway show "Hamilton?" Alexander Hamilton was, you guessed it, an immigrant. I hope you remember the term xenophobia. We need to embrace our diversity because it really is a strength. Why do you think we dominate the World Olympics? Diversity. So, students, E pluribus unum: out of many one. Today students, I've given you food for thought because you ALL need to vote. When? Not November 27 like one of the candidates suggested. November 8 is the date. Remember students, it's the second Tuesday of November every four years for the president. It was on the citizenship test we took. Today, I want you to remember your civic duties: mandatory duties are paying taxes and obeying the laws. Others are being informed about political issues, serving in your communities for the greater good, and voting. Your homework is to go vote!

Dedicated to all my former History students. Do your civic duty.