The Meaning of MLKJ Day 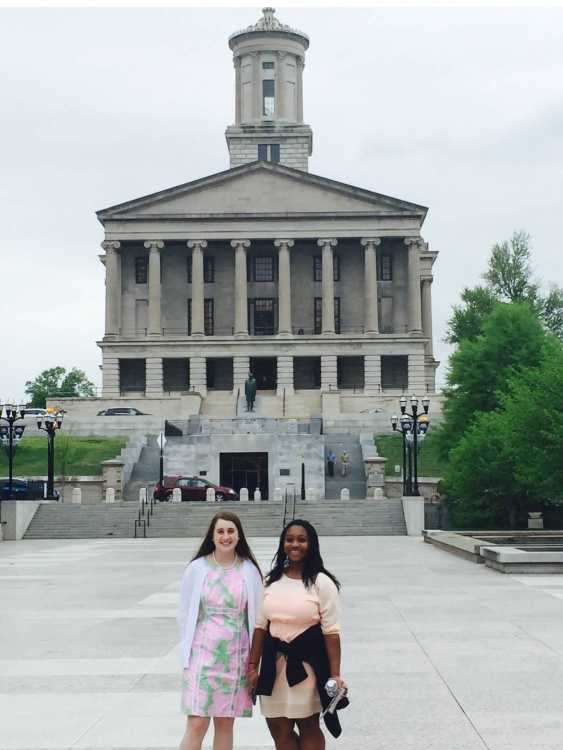 Abbey and Mariah on the steps of the State Capitol after Abbey's speech at the Holocaust Remberence. 4/13/2015

In my mind today, I'm thinking about St. Peter Claver, Dr. Martin Luther King Jr., and justice. Monday was the holiday dedicated to honoring the accomplishments of Dr. King and his leadership for the Civil Rights Movement. As an American History teacher, I loved this unit. We learned so much about love, respect, and justice. The historical footage was riveting to all of my students. I showed them the marches, the bus boycotts, the dangerous bus ride to the South to register voters, and lunch counter protests. My students until then never understood the story. I would stop the footage and examine the crowds with them. Although most footage was recorded in black and white, we saw all colors of people working for justice. They didn't realize the sacrifices made by all people. It didn't encourage white guilt but a genuine understanding of how things were so different and the need for change was so crucial. By the end of the unit, we had faced the issues and dealt with it in a positive manner. It made us a tighter, more cohesive unit. We looked at the cruel and ugliness of human nature and moved forward. I so miss teaching social justice. It is truly vital to creating a better world. Students, we still have so much hard work ahead of us.

As I studied this week, ironically I uncovered St. Peter Claver, the patron Saint of slaves. He lived in the 1600's. He was a Spaniard and was sent to New Spain, Columbia, South America, to do preparatory work to become a priest. He encountered the slave trade first hand and was horrified. He vowed to be a slave to the slaves. He ventured to the bellies of the slave ships amid the stench of death, disease, and feces. Yes, students, poop, pee, and rotting bodies. He washed them, gave them food, and tried to show kindness before they encountered the auction block and their harrowing life assignment. Harrowing is not strong enough a word, damning. His mission didn't stop at the docks. He made sure to visit the plantations and minister to them. The Spanish owners forbade splitting of families of their slaves unlike the English colonies. Peter spent 40 of his 70 earthly years ministering to not only African slaves but also to prisoners and Native Americans. Did he do this because there was no other job available? No, he was born to honest, hard working Spanish parents. People mocked him in his later years as "dumb." After his death, thousands of Africans and Native Americans celebrated him as a National Hero. Sounds familiar.

Students, what can we learn about justice from this? First like St. Peter Claver and Dr. Martin Luther King Jr. taught us, we have to face the evil head on and admit there is a problem. Second, we have to realize that we can be an advocate of change by our actions. We can get involved in our own communities. Last, we need to teach and show that God loves us all. He doesn't pick and choose according to color, race, or ethnicity. Believers or non-believers along with sinners and saints, he loves us. Our simple task is to spread that love to the best of our abilities.

Students, our whole unit full of hate did a 360 degree turn. As we muddled through it, we always found a way to love each other. That's what I was secretly teaching all those years in my classroom, charity, justice, and love.

I hope Monday you took time to bring unity and peace into your community. A national day of service and trying to understanding each other. Helping with the on-going battle for justice and love in our world is part of our civic duties. Our battlefield is a busy place. Is there still slavery? Yes, it's called human trafficking. According to the United Nations, 27 million humans are enslaved in the world right now. 40,000 are in the United States. Most of these humans are women and children. We also are slaves to drug addictions as well as pornography. Let's not forget materialism and narcissistic complexes. Luke 4:18 still applies today. "The spirit of the Lord is on me, for he has anointed me to bring the good news to the afflicted. He has sent me to proclaim liberty to captives, sight to the blind, to let the oppressed go free," Are we turning a blind eye?

Quote of the Day:

“injustice anywhere is a threat to justice everywhere,”