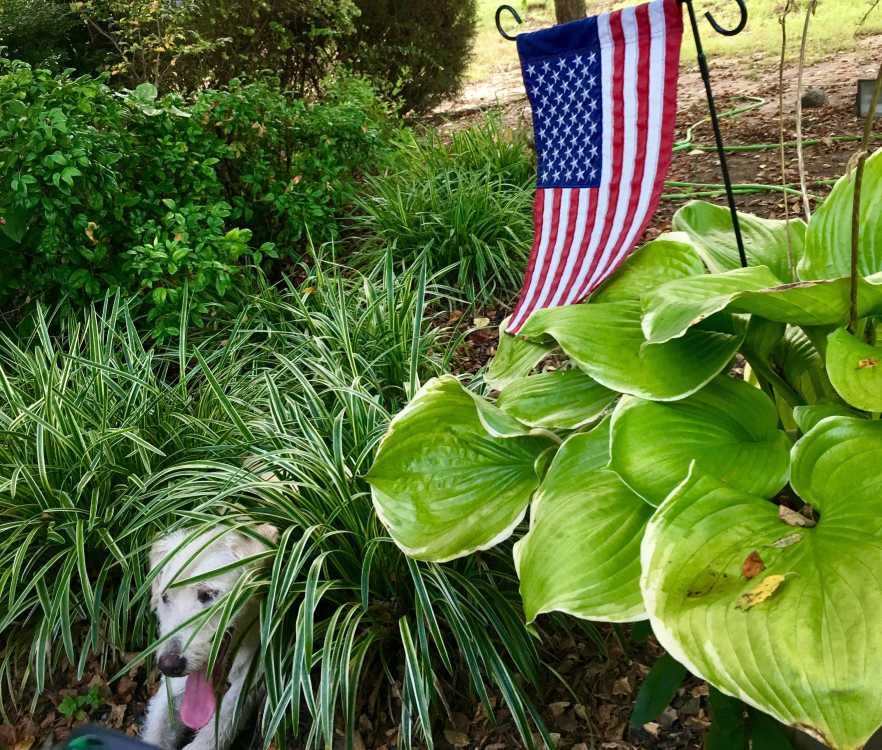 The new fur child that chose us, Dolly. She wandered up and is breathing life into my older girls. Inspiringing them to romp and play. It''s truly a gift. She's sitting by me in the yard whilst I think about America.

In my mind, I'm thinking about forgiveness. Have you ever held a grudge? Did the sight of someone that hurt you make you emotionally, mentally, and physically sick? I admit it. I've had those feelings before. They were toxic. It made me loose my religion and control of myself. That's what hate, envy, and jealousy can do: make you lose your soul and control.

Did you ever try to step out of the situation and analyze the reasons behind the scenario? You should. When you are able to rationally examine the situation, you gain clairvoyance. Every problem personal and political has it's time stamp. Each problem we face is unique in its time and place. You've heard the saying "You have to take the good with the bad." Every aspect of our own timelines is a chance to grow and to forgive. Really forgive. Genuinely forgiving is letting the person you forgive freedom to be responsible for his or her actions. Love them enough to let go and let live. You cannot force forgiveness or put stipulations on it: if this then I forgive you. I think America is being torn apart by hate, because forgiveness hasn't been genuinely been given. It is erupting into a sea of hate. The current situation is actually fueling the fires of hate.

While the media fans the flames of each side of the current political argument, where do we Americans stand? Do we really understand the complexity that this current dilemma evolved from? I fear many Americans of all ethnicities do not. It's so much more than a black and white situation. I was born a white, Caucasian like the other 62% of today's Americans. I cannot understand the reasons behind the forefathers perpetuating an evil institution like slavery except for money for the 1% of wealthy white land owners. See. Economics and money are all a part of the wheel of injustice. My ancestors were literally dirt poor European descended sharecroppers with a sprinkle of Native American living a similar plight during the late 1800's and early 1900's. What breaks the spell of ignorance and poverty? Education. This is a commodity that is drastically dwindling in America.

I hope America is learning and moving forward with forgiveness among all people. I can only help what I do in my space and time on the timeline of history. Creating divisive agendas only keeps the common men and women at odds while America goes to hell in a hand basket. What should rule? Majority interests or minority's? Our history however treacherous or spectacular cannot be undone or erased. Think really long and hard about this. We can only learn from our mistakes and try to create a better tomorrow. Whatever happened to the E pluribus unum? That's America. We all deserve chances and freedom to make our own choices. This whole blog started out as simple forgiveness, but evolved into a plea. America can we genuinely forgive? Can we lay down our prejudices of all varieties? Can we all move forward for the good of ALL? Can we quit saying yes, but.... It's time to truly forgive each other America. We are all losing until we do.

"If we don't figure out a way to create equity, real equity, of opportunity and access, to good schools, housing, health care, and decent paying jobs, we're not going to survive as a productive and healthy society."

"Social equity is based on justice; politics change on the opinion of the time. The black man's skin will be a mark of social inferiority so long as white men are conceited, ignorant, unjust, and prejudiced. You cannot legislate these qualities out of the white - you must steal them out by teaching, illustration, and example."

"America will never be destroyed from the outside. If we falter and lose our freedoms, it will be because we destroyed ourselves."

"The greatness of America lies not in being more enlightened than any other nation, but rather in her ability to repair her faults."

"Now, as a nation, we don't promise equal outcomes, but we were founded on the idea everybody should have an equal opportunity to succeed. No matter who you are, what you look like, where you come from, you can make it. That's an essential promise of America. Where you start should not determine where you end up."

I ask myself if slavery can ever be abolished from America's psyche? Eh, Nina? I answer, "I pray time really can heal all wounds. Let forgiveness ring."