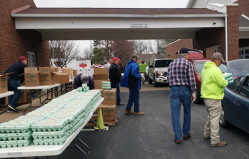 More than 350 families were fed on March 9 during Mid-South Food Bank’s mobile food pantry in Newbern. The next mobile food bank for community members in need of food will be from 11 a.m. to 1 p.m. March 30 at the First Baptist Church in Newbern.

An area industry has teamed up with Mid-South Food Bank, the City of Newbern and a local church to distribute food by the truckload in an effort to eliminate hunger within the community.

Tyson Foods has contributed $25,000 through a grant program to help the food bank provide food for needy families within Dyer County. On Monday, March 30, Mid-South Food Bank’s “Hunger Hope Mobile Pantry” will be in Newbern from 11 a.m. to 1 p.m. handing out perishable and non-perishable food items at the First Baptist Church.

Stan Welch, Plant Manager at Tyson Foods, said the generous donation will allow the food bank to bring monthly loads of food to Newbern for a year.

“This is the second year Tyson has donated $25,000,” he said. “It is all about supplying food and feeding the community. Dyer County always has a need for service like this and Tyson was looking for a way to serve the community.”

Community members in need will be given fruits, vegetables and proteins.

Welch said over 350 families were helped during the last mobile pantry, on March 9.

“We are preparing to feed another 500 families,” he continued. “We are expecting a bigger crowd this time.”

At the mobile site, community members should bring their photo identification to show proof of being a Dyer County resident. Employees of Tyson must provide their work identification to be given foods. Vouchers are not used.

Welch said he and other employees of Tyson routinely volunteer for the food distribution.

Members of the First Baptist Church in Newbern usually volunteer to help distribute the food monthly, he added.

“The First Baptist Church in Newbern has partnered with us to provide a location and lots of volunteers,” said Welch. “The City of Newbern has been outstanding and the Newborn Police Department have been supportive and help with traffic.”

The date of the April Hunger Hope Mobile Pantry has yet to be determined.

According to a release, Tyson Foods hopes to soon donate a total of 16 million meals to Feeding America food banks, community pantries near their operations and other hunger-relief agencies.

Welch said Tyson was proclaimed this week by the United States Department of Homeland Security as a critical infrastructure company.

“This means when others may be forced to close, Tyson will be open for business as we try to help supply the nation with food,” he continued.

Comments
View 3 comments
Note: The nature of the Internet makes it impractical for our staff to review every comment. Please note that those who post comments on this website may do so using a screen name, which may or may not reflect a website user's actual name. Readers should be careful not to assign comments to real people who may have names similar to screen names. Refrain from obscenity in your comments, and to keep discussions civil, don't say anything in a way your grandmother would be ashamed to read.
Respond to this story