"Out of My Body and Into My Mind" 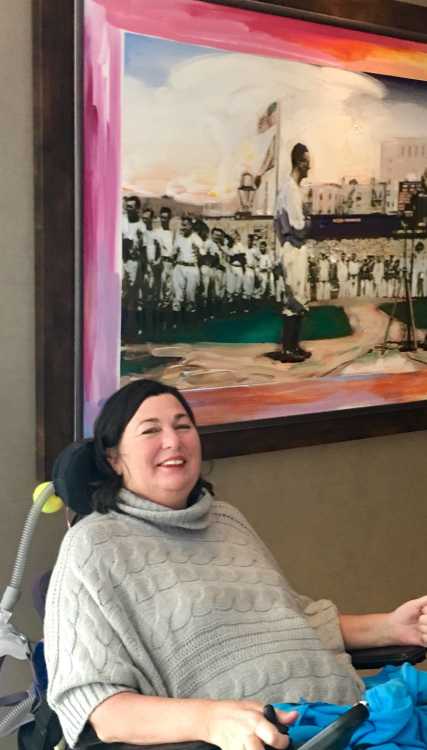 Me at Yankee Stadium with a portrait of Lou Gehrig

"Out of My Body and Into My Mind"

I've always been an athlete and lover of sports as long as I can remember. I was the neighborhood girl that was in the midst of the boys playing baseball, basketball, kickball, and even football. I loved the competition and the thrill of winning. The recess playground at Holice Powell was my haven. I remember all of us bringing lucky bats and tennis balls because of the dangers of a real baseball. We had a makeshift field, so completely dusty and fabulous. The dynamics of the players were diverse: boys and girls of all levels and abilities. Every playground and grade has a kid with skills more keen than all of their other peers. He or she becomes the alpha of the playground. Ours was Jeremy Huckabee. We all wanted on his team. He would pull out all the stops to ensure a victory march into the building to go to lunch. He would even feign injury when thrown out, "play the hurt card", and get called safe out of pity from the opposing team. The only pitfall to getting picked by Jeremy was that if you got two strikes, he got your last strike and batted for you, especially if you were a girl. One vivid memory I have is when I got the dreaded two strikes and Jeremy tapped on my shoulder. Do you think I handed him the bat? You bet your shorts I didn't. I stood up to the alpha and argued him down for my last strike. After a little help from other protestors, I got back in the box. I had Mr. Alpha's lucky silver aluminum bat with the handle wrapped in masking tape. What happened then? Did I strike out and lose that moral victory and prove that girls should never get their last strike ever? Remember that this was a vivid memory. I knocked that glowing yellow tennis ball over the monkey bars, in the air might I add. It was a home run!

Why do I start my adventure as a columnist with this introduction? Remember, I'm living with ALS/PMA and not dying with it. I'm out of my body and into my mind sharing my journey up to this moment.

Now, let's go back to Holice Powell. One of my favorite things to read was autobiographies and biographies of athletes. I remember one of my teachers had the coolest reading area. We had comics, various books, and these ultra cool athletic biography cards. She probably got them from Time Life, but all I know is that they were one of my favorite reads in the reading nook. I remember reading about Lew Alcindor (Kareem Abdul-Jabbar) and how he didn't realize he was black until he encountered racism. I remember reading about Tom Dempsey, who had only half of a foot. He broke so many records, and he was born with that foot. Talk about making lemonade out of lemons! Lastly, I remember the Lou Gehrig card. He was amazing and died so young.

As a kid, we had an antenna. We could only get about five channels. On weekend nights, channel 3 would have the late show, the late late show, and the late, late, late show. On one of my late show binges as a child, the movie "The Pride of the Yankees" came on and I was clueless about how the foreshadowing and irony of that movie would happen in my own young life. I wept as he gave his speech. I became a closet Yankee fan that day. I hope even hardcore Cardinal fans could empathize; my mom did. My young mind was thinking that that has to be the worst thing ever, especially to someone who loves sports. Well, it is, but like Tom Dempsey, I make a lot of lemonade these days. This reflection is just scratching the surface. I plan to share my ups and downs of living with ALS/PMA. Hopefully, this will be a weekly gig for my hyperactive mind trapped in this weakening body. If you see me rolling around the 'Burg, give me a fist bump, because God's not finished with me yet.

More from this blogger · Sarah Alley
Comments
View 1 comment
Note: The nature of the Internet makes it impractical for our staff to review every comment. Please note that those who post comments on this website may do so using a screen name, which may or may not reflect a website user's actual name. Readers should be careful not to assign comments to real people who may have names similar to screen names. Refrain from obscenity in your comments, and to keep discussions civil, don't say anything in a way your grandmother would be ashamed to read.
Respond to this blog