Blogging with Brandon: In My Own Words
Brandon Hutcheson
Recent posts
Archives

Just love one another 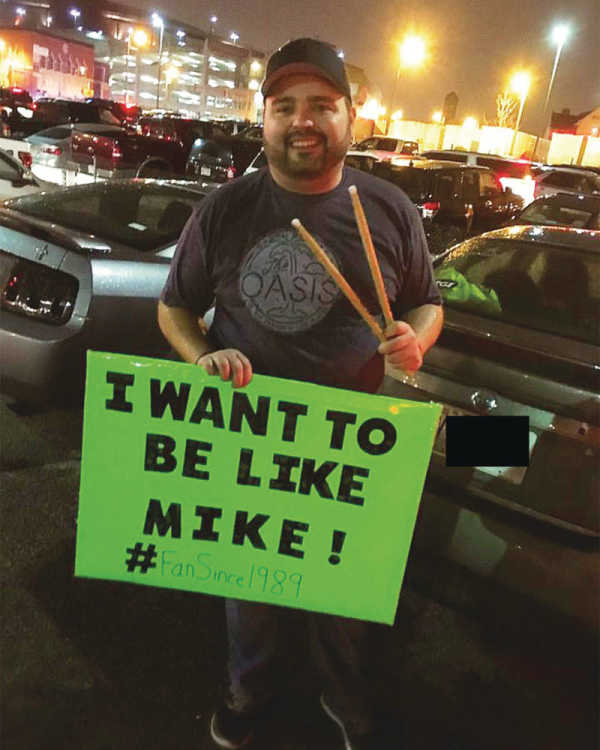 A picture of myself with the sign that I made for Mike Palmer, Garth Brooks’ touring drummer. Palmer threw me a pair of his signature edition drumsticks after reading the sign.

Just love one another

“Love changes everything, so fill the world with it” – Kid President

Music has always been a part of my life. Usually, it played second fiddle to football, but once those days on the gridiron were over, it became more prominent.

My dad put it best, “Son, it’s a part of your heritage.” I guess he was right. From his Mississippi-based family members performing and touring with Rock N Roll royalty in Elvis and Jerry Lee Lewis to my mother being a charting Country-Gospel artist, I never had a chance of fighting the music bug.

Even today, my younger brother and I are currently carrying on the ‘family tradition’ as we both perform in a local band, he on guitar and vocals, myself on drums and vocals as well.

My earliest memories of music that I can recall are from the late 1980s/ early 1990s. How I haven’t the slightest idea how this particular cassette tape wound up in the hands of my mother, the contents on that tape would forever leave an impression on me.

The cassette tape was an album called ‘No Fences’, and the artist was Garth Brooks.

Ask any family member of mine and they will tell you I was infatuated with the guy. I would mimic his movements while watching one of his taped live shows. I even made a wireless headset microphone using straws, and yes, even going as far as to break a guitar across a bed just because Garth broke one on stage (sorry Dad).

I have always been a fan. When he announced his tour stop in Memphis at the FedEx Forum it was a no brainer, I was going.

I lucked out and got 2 floor seats for the Saturday (2/4) afternoon show. I was not aware that my girlfriend’s mother also purchased tickets for me and wound up with 1st row seats behind the open 360 stage. Obviously, my girlfriend and I occupied the 1st row seats. I sold my floor seats to my brother for he and his girlfriend to enjoy.

I had made a double-sided sign to take with me. One side was in reference to my girlfriend’s birthday, while the other, was directed at Garth’s drummer, Mike Palmer.

As a drummer, I always patterned my techniques around Mike Palmer. Palmer has been Garth’s live show drummer since 1988. My sign for him read, “I Want To Be Like Mike #FanSince1989”.

After performing ‘Friends In Low Places’, Garth introduced Mike Palmer. Palmer runs to the front of the stage and bows before the audience. Then all of a sudden, on the way back to his kit, he jumped off the back of the stage to the arena floor. (It was about a 12-15 foot drop).

He ran over to my section, pointed at me, and preceded to toss me his signature edition Vic Firth drumsticks.

I was in total shock.

I guess Garth was curious to know what was going on, so he asked me what my sign said. I held it up, but was still in so much shock, I had no idea what he was saying.

All I can remember he jokingly said to me that I better hope that, “Palmer gets his behind back to the stage because we weren’t finished yet.”

However, for me, those weren’t the best moments of the show.

Forgive me if the story so far seems braggadocios. That’s not my intent, but the REAL story begins here.

I have attended 3 Garth concerts and each one has had the same constant theme: love.

He constantly reminds the audience to love one another. He tries to make every audience member in attendance, no matter front row or nose bleed section, feel important. He looks out in the crowd and interacts with the individual. That reflection of love somehow takes over the entire arena audience. Of the shows, I have attended, I’ve never heard vulgar language or seen anyone fighting – it legitimately seems like everyone, for a moment, loves one another.

During this particular Memphis show, there was a little fellow about 2 rows behind me that looked to be about 2 or 3 years old. His mother held him during the entire show, and he held a sign requesting to hear a song. Not only did Garth and the band play it for him, but Garth and fiddle player Jimmy Mattingly stood in his direct line of sight and performed it just for him.

There was a lady, who looked to be in her late 60s, sitting off stage left in the first dozen or so rows. Garth recognized her as one of his co-writers to a particular song that he said he never performed live. He played it that day, just he and a guitar, and she was singing it right back to him.

Those two moments were great, but the last moment is something that I believe made the whole concert worthwhile.

It began with Garth’s wife, Trisha Yearwood, noticing a sign of a young lady who was fighting cancer. Trisha changed her set list and played a song called, ‘Prizefighter’, that talks about fighting the disease, for the lady. Later on in the show, Garth comes back out, introduces himself, and gives her his custom made Stetson cowboy hat, while he wore a baseball cap for the remainder of the show. (The video is circulating on YouTube. I suggest you all check it out!)

In a world when being kind isn’t the norm and celebrities act like jerks, it’s cool to know that there are big name folks out there who really care about people.

After leaving the show, and after my initial shock wore off, the phrase that was said over a dozen times, ‘Love One Another’, kept going through my mind.

What if we all DID attempt to love one another?

What if we attempted to look past race, religion, or social status?

What if we looked at one another not only has mankind, but as God’s children?

Would it cut down or eliminate the violence in our country? Would people tend to look out for other’s best interests more often instead of concentrating on themselves? Would we all get along better?

If it weren’t for love, there would be no way we would be offered a way into the Kingdom of Heaven. Without love, God would have never sent his son to die on the cross for our sins. Think about that. We are so unworthy of God’s love, but yet He loves us anyway and provided a way to be with him forever in paradise. He loved us before we ever knew Him.

Love gives hope. Love makes things that may be unbearable bearable, and love can change everything. If you can only do one thing for any one, love them.

Just love one another.

More from this blogger · Brandon Hutcheson
Respond to this blog