Blogging with Brandon: In My Own Words
Brandon Hutcheson
Recent posts
Archives

‘A love without end, Amen’ 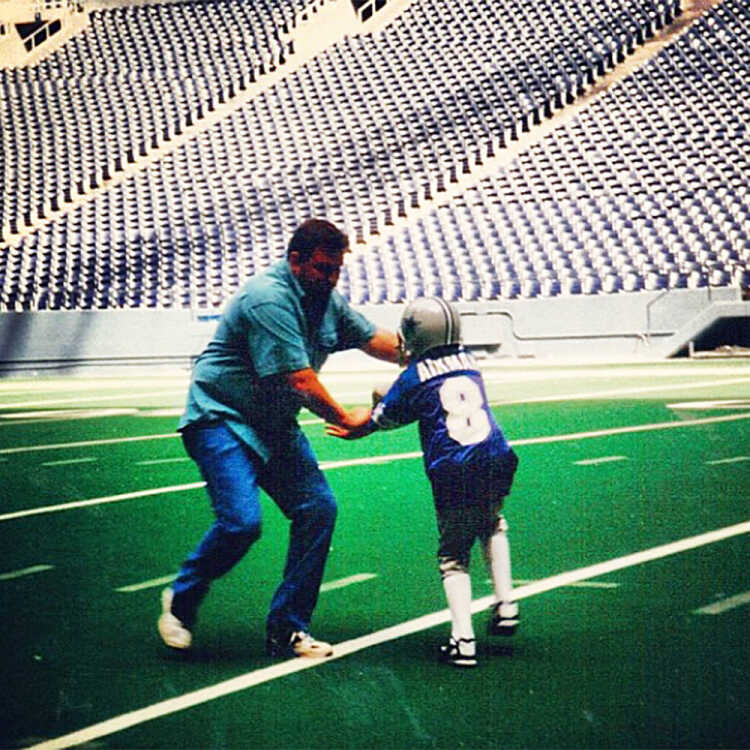 This photo is of my father Tony (L) and an 8-year-old version of myself (R) on the field of Texas Stadium, the home of the Dallas Cowboys from 1971-2009. My family has always loved to travel, but we have usually have gone places that most suited brother, my mother, or myself. This is one of those occasions where Dad got in on the fun, with all of us being die-hard Dallas Cowboys fans. It’s probably my favorite picture of the old man and me. Photo circa 1997.

‘You see, daddies don’t just love their children every now and then

It’s a love without end, Amen’

First of all, let me apologize. Yes, it has been a while since I’ve written. Sometimes life and other responsibilities get in the way. Then again, there have been moments that I have just plain forgotten… oops! I promise to do better.

Anyway, let’s get after it, shall we?

With Fathers Day quickly approaching, it has made me think more about my dad, the sacrifices he has made for his family and the kind of man he is.

My father, Tony, was born, raised, and still resides in his hometown of Ridgely in Lake County. The youngest of 4 children, his siblings will tell you that he got away with pretty much anything. To hear him tell it, it was his brother and sisters on why he received most of his whippings.

My dad is a jokester. He likes to have fun and make people laugh, especially his family. Oh, the stories he can tell about the harmless pranks pulled on family members and friends. My favorites are the ones involving all of the shenanigans he and his buddies got into during their high school and young adult years.

However; he is probably one of the most serious, straightforward people I have ever known in my life.

Correction, he IS the most serious, straightforward person I have ever known in my life.

Though he likes to have fun and cut up, when it comes down to business, he has never minced words. He has always been a ‘tell it how you see it’ type of person.

Growing up, his parents and all of his parents’ children were out in the fields, chopping cotton. His father had a first grade education and his mother attended school through 3rd grade. As the custom years ago, the poor families didn’t work for monetary value, they worked for what was called a ‘Bean Order’. For those of you that do not know what that is, basically, whoever you worked for wrote down how much flour, eggs, etc. each worker could obtain from the general store.

My father was in his late teens/ early 20s when he moved into a home that had indoor plumbing.

He graduated from Lake County High School in 1983 and began his career in the workforce, starting with the Tennessee Department of Corrections. He was employed at the old Fort Pillow Penitentiary as well as Northwest in Tiptonville. In 1997, he began his stint in fire protection, and in 2009 he opened his own fire protection business – serving customers in West and Middle Tennessee, Southeast Missouri, and Western Kentucky.

Though as proud as I am of that, to me, what I am most proud of my dad for is the 16 years he served on the Lake County School Board.

The ‘Hutcheson’ last name never really carried a lot of weight in Lake County, and it doesn’t to this day. When dad ran for school board I thought he was completely nuts because the only ones that had ever served to that capacity were members of ‘established’ families throughout the county. He lost the first time, but the second time he prevailed. He held that position for 16 years.

Winning isn’t what makes me proud of him. It’s the job that he did while serving.

He was one of the first members to take the money earned from the position and give it back to the system to fund senior scholarships. When parents had issues or concerns about their child in the classroom, many folks came to dad – even those that didn’t live in his district. No matter the issue or the social status of the family, he would talk to anyone and get back with them with answers. He fought for the students, student parents, teachers, staff. Being politically correct has never been in his wheelhouse, and he has never been afraid to call out ‘bull’.

I will never forget a time where there were talks about changing the Lake County school year to more of a ‘year-round’ schedule, shortening summer breaks, but increasing fall and spring breaks. I remember dad asking parents and children in the community for their input. Of course all of the kids liked the longer summer breaks.

He never wanted to put words in people’s mouths, but rather he be their voice.

The children in the community have always been important to him.

For years, he helped organize a church basketball league for the youth with other Church of God of Prophecy churches. He was the coach, drove the bus to the games, and there were 2 requirements to be on the team:

If you missed Bible study, you didn’t play. If you didn’t do right, you didn’t go to the game. Granted, some of the kids may have initially came for the basketball, but Bible study became more prominent over time. The youth group grew from just a handful to well over 25 kids.

He has even helped many of the people that my brother and I have grown up with. For example, he has invited them over to his home and grilled hot dogs and hamburgers for them. He has paid to help local young people to take tests for college. He listens, and has always advised them to do the right thing.

Many of these donations and dollars spent have gone unpublicized because he has never been one to boast about anything he’s ever done. In all honesty, he would probably kill me if he reads this. Until recently, I never knew of most of the things he has done for Lake County kids. I have heard it from many of the people I grew up with, ‘Tell Mr. Tony thank you for this’ or ‘Uncle Tony [as he has become known by some Lake County young people] really helped me out. I appreciate him.’

I can go on and on about the man he is, but I believe that this is the best time to talk about the father he is.

As his first born, he said he was literally too scared to hold me. I cant imagine what it’s like to be a dad for the first time, so if/when that time comes from me, I’m sure I’ll be the same way. Growing up, ‘I love yous’ and massive amounts of compliments didn’t come every day. Instead, he made sure I did my homework, studied for tests (Good Lord at all of the spelling tests), and just made sure I was being responsible with my studies. One time, I missed getting an A on my report card because I did not earn all of my AR points. I was in 6th grade at the time, and I missed that A by 7 points. He told me that I had to earn 7 additional points on top of what I was required to have. So if I was required by my teacher to have 12 points, in reality, I was supposed to have 19 points to make sure my behind was safe at home. Oh, I failed to mention, that wasn’t just for the remainder of 6th grade. It was for the remainder of my time in Lake County Schools!

Now, before anyone gets in a tizzy about how cruel it may sound, let me shed some additional light on the situation. At the time, I thought it was the meanest thing ever, but he explained it to me like this: ‘You went short of your goal, and it cost you an A. Never settle for second best. Never become lazy. You never want to just get by. The 7 additional points was not only to make up for my laziness, it was to show when you slack up, you have to work even harder to make things happen. Nothing is just given to you, it’s earned.’

Because of him, I got to drive a NASCAR stock car, attend Dallas Cowboys Youth Football Camp, travel to Dallas 3 times for Cowboys’ games, see many concerts and fund many school-related trips. I’ve been fortunate enough to see and do many things, eat at some of the best restaurants in the country, and be a part of events because of both he and my mother.

In all the years I was involved in athletics, and now music, he and mom only missed 2 games (Mom was nominated at a music award show, so that’s totally understandable) and the only shows they’ve missed were the ones that were private gigs. Anything my brother or I have been involved with, both he and mom have been there. Dad always got to games about 2 hours prior to kickoff – no matter if it was 100 degrees or below freezing and snowing (Bruceton 2006 geez). He was never quiet either, if any of you Lake County folks are reading this, you know EXACTLY what I’m talking about. I’m sure the officiating crews across the area are glad that he no longer has children in high school athletics!

As I’ve gotten older I’ve asked him why he never made a trip around something he wanted to do or go buy something that he wanted like a new shop for his business, a truck, or boat, and the response I would get is that he likes seeing us get excited and he being there for that.

A few Decembers ago, he gave us all a scare. He suffered a stroke, which at the time neither himself nor us were aware of. Though I won’t go into this very deeply, he spent almost a week in the hospital in Jackson. It was during that time that I realized how many people that he had impacted. Former co-workers, former and current students and teachers from the Lake County School System, community members, friends locally and out of state, and of course family either came to Jackson or sent texts and Facebook messages offering well-wishes and bringing food to my mom, who never left his side.

After the doctors released him, dad hopped up off the bed and shouted, “I may have come here in an ambulance, but I’m walking out of here today!” Though he scared us, he’s doing just fine today.

Throughout his life, he has never strayed from being himself. There are times that I don’t see eye to eye with him or his opinion on things. Sometimes his straightforward ways do tend to irritate me.

It’s irritating because 99.9 percent of the time, he’s right.

And the crazy thing is that the older I get, the more I’m starting to be just like him.

He’s still the ‘poor boy’ who grew up the only way he knew how; working hard, being honest, not sugar-coating anything, politically incorrect, cheerleader for the underdog, but who would be willing to do anything for anyone at the drop of a hat. He still treats everyone the same, whether you grew up dirt floor poor or part of the more well-to-do crowd. He’s still the same God-fearing man who loves his wife, kids, and entire family – though he may not say it often. His actions speak louder than any words ever could.

He’s the person that I am proud to call my father, and I his son.

To my dad, and all of the fathers out there, Happy Fathers Day!

More from this blogger · Brandon Hutcheson
Respond to this blog