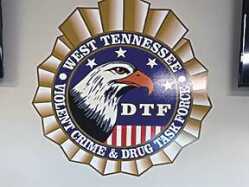 Agents began investigating the occupants of 245 Greenway Street Apt #13 back at the beginning of May 2021 after receiving complaints about frequent in-and-out traffic and the/sale of methamphetamine. The apartment sits approximately 371 feet from the pitcher's mound of Dyersburg High School's baseball field.

On June 7, 2021 agents were conducting surveillance when they observed two males exit the apartment and one male conduct a hand-to-hand drug transaction with an unidentified person(s) inside of a vehicle. Both males then got into a vehicle to leave the apartment complex. A routine traffic stop of the vehicle resulted in Agents seizing approximately 1/4 of an ounce of methamphetamine.

A subsequent search of the apartment yielded another 1/2 ounce of meth, five sets of working digital scales and sandwich baggies which are commonly used in the sale of methamphetamine.

Roy Thomas Kitzmiller, 38 and Dennis Wayne Shepherd, 42 both of Dyersburg were arrested and transported to the Dyer County Jail where they are being held.

Kitzmiller is charged with possession of meth with intent to sell within a drug-free school zone and possession of drug paraphernalia. Shepherd is being held on outstanding warrants out of Gibson County. "My agents are out here working hard every day to clean up Dyer County and our goal is to get them all," said Carter. "If you want to move to the head of the line, sell drugs in a school zone."

The office of the 29th Judicial District Attorney General Danny Goodman is prosecuting the case.