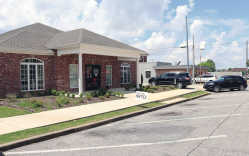 On Wednesday afternoon, June 24, the Dyer County Clerk’s Office closed until further notice due to an employee testing positive for COVID-19. Dyer County Clerk Diane Moore said she and her staff were notified of the positive test result at 1:30 p.m. Wednesday and immediately closed the facility.

“We closed the doors as soon as the result was confirmed,” stated Moore. “We have been speaking with the doctor at the health department in Jackson. They are swamped, so they can’t give us any guidance. It may be tomorrow [Thursday]. So, we have closed the doors until further notice.”

Though Moore is awaiting guidance, she added, “We will probably be closed for 14 days. That’s what the CDC recommends. We’ll have to have the office deep cleaned, but right now, I don’t know what is going to happen.”

Moore said she and her staff would also be at home.

“We’ll probably have to be quarantined for 14 days,” Moore stated.

As many county offices have staggered employees, Moore said her office, consisting of 8 total personnel, could not operate efficiently without all employees present.

“We never missed work. Our business stayed the same, and in one month it went up. We’ve been doing the same amount of business, and there is no way we could have done it with only 2 or 3 people,” Moore explained. “During this whole pandemic, we’ve had all of our employees working. We couldn’t stagger them.”

Moore noted the only current option for tag renewals is to use the kiosk located at Newbern City Hall.

“The kiosk is operational and the only option at this time. We already contacted them at Newbern City Hall to let them know. If someone went online [for renewal], an employee would have to be here to mail it to them.”

Speaking on the closure, Dyer County Mayor Chris Young stated, “I think it’s very unfortunate that we have to do that, but we have to consider the safety of our employees. Most offices staggered their personnel, just in case if something like this happened, but she [Moore] was not able to do that. It kind of caught us at a bad time.”

As for plans for the office and recommendations for operations, Young said, “It is her office to do as she sees fit. It’s not my call.”

As employees of the office have been sent home, Dyer County Sheriff Jeff Box confirmed three deputies have also been sent home as a precaution as they had worked security for the County Clerk Office.

“We are taking precautions since we had 3 employees provide security for her [Moore’s] office and possibly had limited contact with the office employee. They aren’t showing any symptoms. It is only a precaution,” said Sheriff Box. “Two will be able to return to work after quarantine and a negative test result on July 1 and one on July 3.”

As for the office, Moore added, “I’m sorry, but this is something we can’t help. But we’re going to get through it.”

The State Gazette will provide further information as it becomes available.