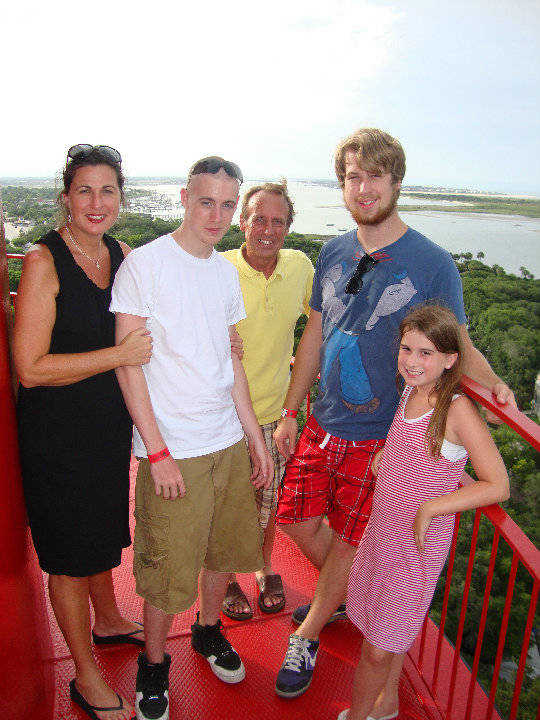 Alley Clan in St. Augustine FL One of my last ambulatory vacations and one of my favorite pictures.

Recently, my life has been filled with recovery time. August is a busy time for parents and teachers. School starting and renewing routines take a lot out of us. August also happens to be the month that I begin searching for sponsors for the annual Autumn March for ALS. I have to take several days to recover from the bursts of activity. This affords me lots of reading time. I am currently reading four books as well as daily scriptures and reflections. At the Alley Casa last night we had a debate on whether to move a smart TV into my bedroom. Sal the ALS Gal, me, was all for it. I told him I could lie in bed and just watch whatever. Like most other Americans I am into binging shows, you know like overindulging. My husband reminded me by saying, "Sarah, why did you not allow the kids to have TVs in their rooms while they were growing up?" Needless to say, I don't have a smart TV in my bedroom. It would keep me from a lot of productivity like reading four books at a time. So I am missing out on some great TV shows but I am also writing which is even better.

One of the books that I am currently reading has brought up the topic of punitive versus restorative justice within Christianity. God in the old testament is very punitive but always loving. The idea of doing something to receive salvation has been ingrained into us. Oftentimes we are too focused on the individualistic aspect of Christianity instead of the communal aspect. The Western culture we live in is so competitive. We want to say you are in and you are out. It is this way not that way. Our popular culture is feeding into the selfish individuality as well. You know it's all about me. Just like Eddie Murphy has said before in his stand up routine, "What have you done for me lately?" Look at our broken justice system with overflowing prisons and jails. There needs to be a paradigm shift. There needs to be rehabilitation. Many of us have loved ones who have been a part of this broken system. Often times people come out of the system so broken they are not repairable. They sink deeper into debauchery. I fear it is just a way to separate people from main stream society and just throwing them away. I don't think that Jesus ever threw anyone away. He was drawn towards the broken. My heart hurts for all of the broken that are living in cages. What is worse is they are trapped within a consciousness of defeat. Don't get me wrong I'm not saying let all the rapscallions loose. I'm saying that there could be rehabilitation and education and most of all love to help these hurting individuals. Kudos to my community for people and non-profits like Tiffany Boyd, Sue Ann Cloar, Judy Boehmler, Transitions, and Matthew 25:40. We are reaching out and try to rehabilitate with love.

Restorative justice is not a new concept. It is involving those that are betrayed with the betrayer. Working out a way to educate each other on the cause of the betrayal. Both sides work on a solution to help avoid further trespasses. It helps people figure out why they are doing things that are against moral precepts. It helps to build skills that many children are not getting these days because of our broken family structures. It helps to build relationships with adults who in turn learn forgiveness. These adults see how people become broken and immoral. I remember a principal who told me I wish I had more teachers like you who tried to understand where children are coming from each day. It would definitely be an eye-opener. He said that most teachers want these children just paddled but that's only part of trying to correct bad behavior. After all other attempts are exhausted, then the paddling was a part of our restorative justice. I genuinely cared about each of those children. Rarely, was a paddling given. I wanted them to grow and to choose to be the good not forced into silence or submission. I rarely had a child that could not read my heart and try to be the best they could be. It's about relationships. It's about community. It's not about groups or individuals who carry the right way to salvation. This is where we are broken in our Christianity. We are too busy trying to get on the right bus to ensure our salvation and we are leaving behind God's chosen people: the poor, the addicted, the prostitutes, and the mentally ill. This is the short list of those left behind. We are not to gather on buses cheering and chanting our way to heaven because we made it. We are to be among all of those who are hurting and needy. There is no joy if there is still so much pain in our communities. To the least of these always enters my mind when I am rolling out around in my community. My mind is constantly whirling on the jobs that need to be done. I am constantly asking myself how can I help? How could I be the Christ within me to my little community? I want restoration. I know that I cannot eliminate all of the hurt, but I could help those that are on my path. Some may say "Bah humbug! Ms. Alley you are wasting your time and resources on all these losers." (Front row I hope this isn't you. The back row kids are a handful but we love them.) You know why I don't listen to the naysayers? I have proof in my Catholic Christianity: The prodigal Son, the book of Habbkuk, Ezekiel chapter 16, and Jeremiah chapter 31:31. God wants us to love and restore each other. His love cannot be put in a set of rules and regulations. We have it within us. We just need to give it to others in our community. I truly believe this is what we are called to do before we are to enter into our next adventure with God.

Today's reflection was quite an academic one. As I have said before, I am always learning. I am constantly seeking a deeper connection with God. I am trying to live in joy not fear. Last but not least, I am taking each moment as a gift. It is so exciting to be a light bearer. Today's saints I read about were infamous. They both were huge sinners. One had a concubine, was a lawyer, and a slave to his flesh until he was in his thirties. He then had an Awakening. The other was an escaped Ethiopian slave who had a dangerous gang that pillaged communities. He fled into the desert and encountered Christian Monks. He was educated on the way, the truth, and the light. He had a change of heart. He still had a lot of anger. In one of his angry fits the Abbot took him to the roof top at dawn. He said, "Look! It takes time for the light to overcome the darkness." Don't lose heart. Where there is light there is always hope. Sinners do become saints. Can I get a amen back row?

Quotes of the day:

"Go away and sit in your cell, and your cell will teach you everything.”

"You have made us for yourself, O Lord, and our hearts are restless until they rest in you."